A traveller on the A99 about six miles north of Wick will, if they have any interest in railways, notice what appears to be a remarkably straight double-track narrow gauge railway passing beneath. They may also notice that they are crossing the line on a bascule bridge (i.e. a hydraulic lifting bridge) one span of which can be raised for reasons that are not obvious. 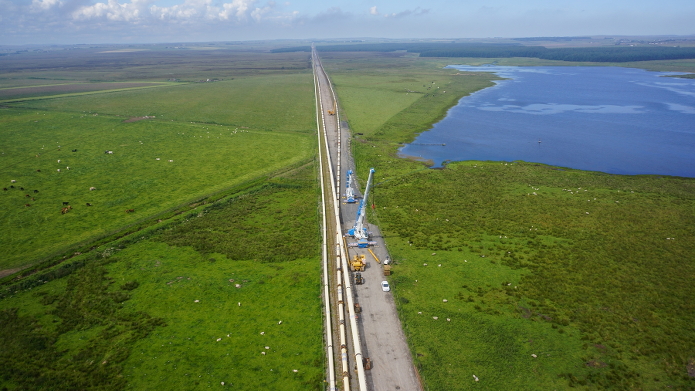 This isn't a railway in the normal sense. It's purpose is the fabrication and launching of incredibly long sections of pipeline, manufactured by Subsea 7, for use by the oil industry under the sea. There are no carriages, locomotives or wagons, just tracks and bogies, traction being provided by a tug at launch time with a 125 tonne Capstan winch at the landward end of each of the long tracks to control back tension. The normal, metre gauge, railway tracks end at the edge of the beach, the pipeline 'train' crosses a recovery pit into which the bogies on which it has been rolling are released for recovery. The 'train' completes its journey into the water on a 240m 'slipway' which is like a railway track but with built-in guide rollers. 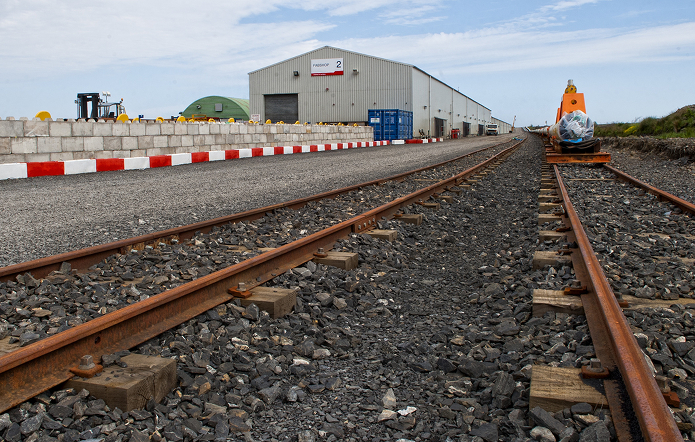 Subsea 7 Fabrication Shop 2 (of three on the site).

Although from the A99 only two tracks can be seen, there are in fact four from just west of the bridge. This allows the simultaneous construction of a total 27km of pipelines. The two longer tracks are each 7.7km and run the whole length of the Subsea 7 site westwards from the sea.

The pipelines constructed here are known as 'bundles' because Subsea 7's specialist technology is used to assemble and package any required combination of flow lines, water injection, gas lift and control systems necessary for any subsea development. Pipes in 12m and 27m lengths arrive at the site, often having travelled on the Far North Line to Georgemas Junction. They are then processed through the modern fabrication shops before being lowered onto cradles, resting on bogies, to form the inner bundle cross section. Once the pipes have been fully welded into the final lengths the carrier pipes are then welded up to form "trains" which are pulled over the inner bundle to complete the structure ahead of attaching the towheads. The whole assemblies can be tested in situ before being launched, towed out to their destination and lowered into position on the seabed.

The two pairs of tracks are separated by a vehicle way.

In order to transport and then install the pipelines every bundle has a 'towhead' attached at each end. These massive structures contain the equipment needed to control the bundle whilst being towed, to connect with other pipelines once placed in position and to control the flow of oil and gas throughout the pipeline system. It is the passage of the trailing towhead that requires the A99 bridge to have a lifting section. The towheads are not manufactured at the Wester site but are brought in, either by sea or road. The larger ones require heavy load specialists to manoeuvre them to the site. On occasion the towheads are so large they have to be delivered directly to the launch site by a beach landing craft and need a purpose-built road across the beach. 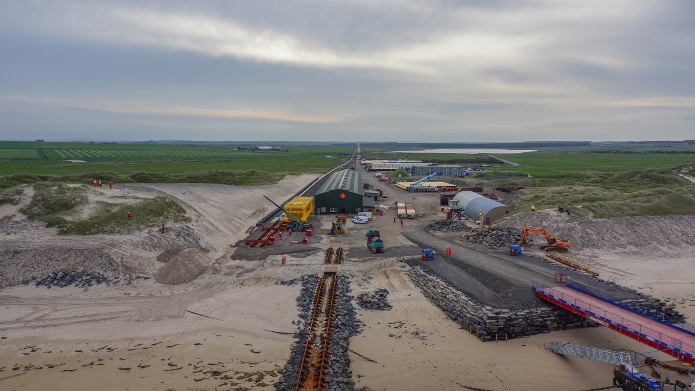 The launch process takes 12 to 36 hours, depending on the bundle length. Tugs (usually 2) with a pulling power of up to 400 tonnes are attached by cable to the leading towhead. The bundle is then towed out to sea until the trailing towhead is 1.5km from the shore. At this point the site winch is disconnected and the trailing tug hooks up to the trailing towhead cable. During the launch tidal conditions and weather are monitored, and tug positions adjusted, to ensure that the bundle remains aligned to the launchway. Whilst in transit these assemblies are the largest man-made moving objects on the planet! 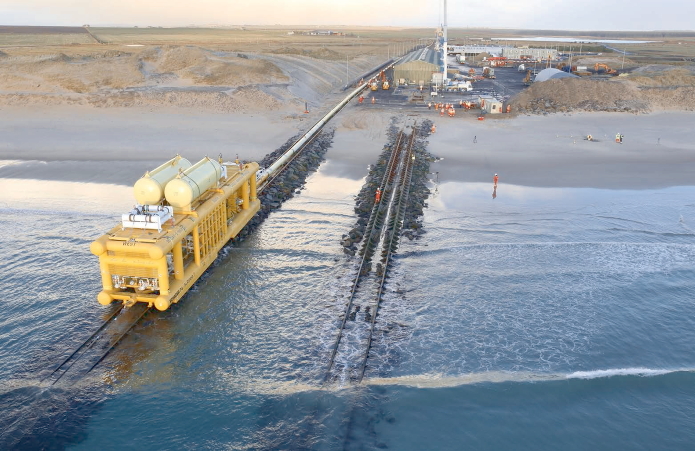 Leading towhead about to enter the water. 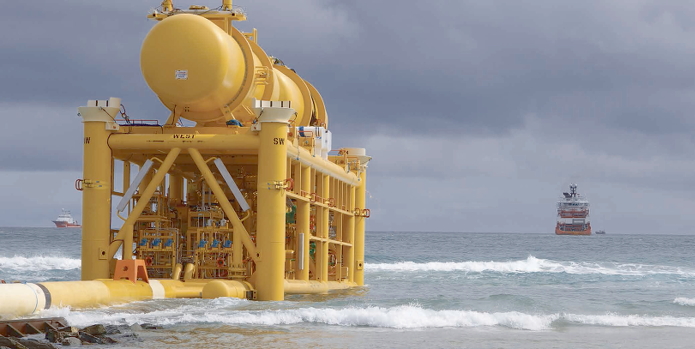 The leading tug in the distance.

Since the site went into production in 1980 over eighty bundles of various lengths up to 7.7km have been launched and installed into the North Sea.

Ian Budd
I would like to thank Willie Watt of Subsea 7 for his help in preparing this article and providing photos, and John Yellowlees for pointing me in the right direction.